Click on green arrows to adjust speed. Speed set by use of 'Greenfoot.setSpeed'.

@Super_Hippo, my attempt was to create this scenario with as little code and with as much simplicity as possible to prevent lag at faster speeds. It has zero Actor classes, but four Actor objects (left and right arrows and the two displayed texts) and four global fields (two booleans for control and two ints -- speed setting and frame counter). Another thing is, with using keys, I would have to use 'getKey' as the change in speed of the scenario would totally mess with 'isKeyDown' (and I am not even sure if 'getKey' would not be messed with -- might have to test that).

seems useful, now i can tell how much my game lags :P 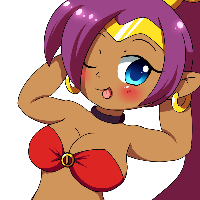 Would it be possible to contain all of the code into one actor that can be inserted in any world and have it effectively display the FPS (for convenience sake)?

Or would it be unable to accurately calculate the FPS if it was just in one actor?

Actually nevermind.... No Idea how it's carrying through worlds.... I obviously need to learn more.