Player Two controls:
Up = Up arrow key
Down = Down arrow key


Upcoming updates (when I have time):
Implementation of varying speeds (for instance the ball would gain a little speed after hitting the bat, and slowly be slowing down at all other times.

Known bugs:
If the bat is not moving when the ball hits it, sometimes the ball appears to temporarily get stuck in the bat, before popping out again.
- Status: I have found where the problem lies, and the fix will be released with the next update.


Other arcade games by me:
Space Invaders [http://www.greenfoot.org/scenarios/3584] 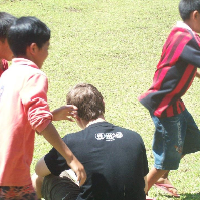 Just realized that this, which is the first scenario I ever made (not just first uploaded, first ever) has got the #3 most plays of all my (uploaded) scenarios >.< Might have to upload a couple later to try and counter that...